Leaving Tibet: "According to the Western calendar, June 12 of this year marks the 50th anniversary of Jamyang Khyentse Chökyi Lodrö's parinirvana. He passed away at the Tsuklakhang, the Royal Chapel in Gangtok, Sikkim, where he had spent most of the last three years of his life as the guest of Chogyal Tashi Namgyal (1914-1963).

In 1955/56 Crown Prince Thondup Namgyal traveled to Lhasa with a special mission on behalf of India's Prime Minister Pandit Nehru: An invitation for His Holiness the Dalai Lama to join the celebrations for the 2,500 year anniversary of the birth of Buddha, which would enable him to forge international alliances, drawing attention to the threats his people was facing. At the same time Jamyang Khyentse Chökyi Lodrö and his party had arrived on their pilgrimage and secret flight from Kham and had taken up lodging at the Samdrup family home, right across from the Jokhang temple. Coincidentally the prince's first wife, Sangey Deki, was a member of the Samdrup family, and so Thondup Namgyal met Jamyang Khyentse at Samdrup Podrang, inviting him to join in the great Buddha Jayanti, via Sikkim.

However Jamyang Khyentse Chökyi Lodrö was not keen to leave Tibet. Many times he talked about how he wanted to return to Dzongsar as quickly as possible. Around Losar 1956, following a divination, the omniscient Sixteenth Karmapa Rigpé Dorje, urged him strongly to avoid even going to South Tibet and instead to seek refuge in Sikkim. During his stay in Lhasa his fame had spread throughout the holy city and many members of the aristocracy had begun to request blessings and teachings. This gathering of influential personalities raised an alarm with the Chinese authorities, so that, after spending his last month in Tibet at Sakya, Jamyang Khyentse saw no other way than to turn south for Sikkim, traveling in the footsteps of the Thirteenth Dalai Lama who had escaped Chinese troops by fleeing to Sikkim in 1909. In his party were Khandro Tsering Chödron, the Lakar family, and about forty other members of their families and entourage.
Jamyang Khyentse Chökyi Lodrö had a special connection with Sikkim. Like the King of Sikkim, Chogyal Tashi Namgyal, he was considered an incarnation of Lhatsün Namkha Jikmé who, with his revelation of the Rigdzin Sokdrup (‘Accomplishing the Life-force of the Vidyadharas’) had established the Dzogchen teachings in Sikkim in the 17th century. In his autobiography Jamyang Khyentse clearly recalled these memories from his former life.

Crossing the rugged terrain of the Himalayas that took them from the high, arid plateau of Tibet across mountain trails, glaciers and snow-bound passes, Jamyang Khyentse Chökyi Lodrö and his party travelled down into the tropical rainforests of Sikkim through Lachen via the Sebu Pass.

At the invitation of the Chogyal, they took up residence in Gangtok's Royal Chapel. During summers, when the hot and humid monsoon sweeps up from the Indian plains, they would move to Kalimpong and Darjeeling where the climate was more agreeable. Everywhere he went he gave teachings and empowerments to disciples who had begun to cross the border in increasing numbers as conditions deteriorated in Tibet. 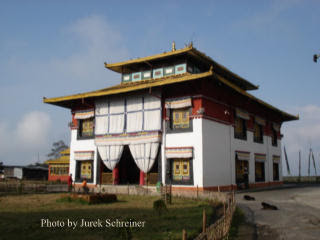 Sogyal Rinpoche remembers that despite the illness that would soon claim his life, Jamyang Khyentse Chökyi Lodrö continued to radiate humour and spiritual luminosity:

“He used to stay in the palace monastery in Sikkim where there's quite a large ground and every afternoon he would go there and drink tea and sit there, and all his disciples would sit around him and he would give a teaching.”

Sogyal Rinpoche also recalls their first visit to a cinema in Darjeeling where they watched a documentary about wildlife and, to the delight of Jamyang Khyentse Chökyi Lodrö, a filmed version of the Ramayana, the Indian epic attributed to the Hindu sage Valmiki (ca. 400BCE).

Jetsun Kushok Luding, elder sister of H.H. Sakya Trizin, recollects that when they were still in Sakya, while anxiously listening on their radio for news about the turn of events in Lhasa, one day they miraculously tuned into the voice of Jamyang Khyentse on All India Radio, as he was giving a teaching titled 'Opening the Dharma'. So far, no amount of searching in the archives of A.I.R. has been able to produce this precious recording of his voice.

Ngari Tulku Rinpoche, about fourteen years old at the time, remembered how Jamyang Khyentse Chökyi Lodrö stayed true to the tradition of Jamyang Khyentse Wangpo and Jamgön Kongtrul giving teachings according to the different capacity and temperament of whatever people came to see him. He recalled to us that the top floor of the Tsuglakhang was always packed with some of the highest lamas. Among them were Gyalwang Karmapa from nearby Rumtek, Chatral Rinpoche, Dodrupchen Trinlé Palbar, Kachu Rinpoche, Dhardo Rinpoche, Dhongthog Rinpoche, Trulshik Pawo Dorje, Khamtrul Rinpoche, Thartse Ken Sonam Gyatso — to name a few!

In those days not only Tibetan lamas and disciples received teachings from Jamyang Khyentse Chökyi Lodrö. Among others his students included the Sikkim royal family, the Indian Diplomat Apa Pant, the translator Sonam Tobgay Kazi, and even a handful of western Buddhists, namely the scholar John Driver, the journalist and humanitarian Robert Godet, and English bhikṣu and FWBO founder Urgyen Sangharakshita. 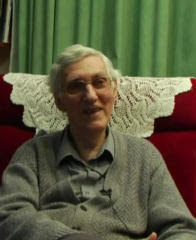 In an interview with us he vividly recalls:

“At certain points in the initiations that he gave, he would be visualising the bodhisattvas, and I could see that as he did so, he was sort of looking up with a beautiful smile, a very beatific expression, as though he could actually see those bodhisattvas floating there in the air before him, and he gave a sort of smile of recognition, “Ah yes, you are there again.”